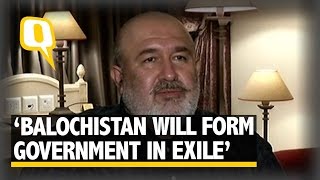 Amir Ahmed Suleman Daud, the 35th Khan of Kalat, asserts that the the formation of a ‘government in exile’ is imminent. Currently Daud lives in Cardiff, Wales (UK) in exile. He says the his great grandfather, Miro Amir, had established the territory of Balochistan in the 14th century, ages before the formation of Pakistan. "Balochistan is a nation in itself and includes many tribal regions within it. If God wills, the Baloch people will come together and form a government in

WASHINGTON – Rep. Dana Rohrabacher, chairman of the House Foreign Affairs Subcommittee on Europe, Eurasia, and Emerging Threats, called on the overseer of the Voice of America to initiate native-language broadcasting to the Baloch people living in Iran, Pakistan, and Afghanistan. The Baloch people occupy homelands that stretch across the borders of the three countries and their “secular, tolerant and liberal tradition is now in danger” of being deprived of access to independe

WASHINGTON DC: The U.S. Congressman Louie Gohmert (R-TX) reiterated his support for an independent Baluchistan at a Congressional Briefing held at the Rayburn House Office Building on May 10, saying, while quoting his conversations with leaders from Afghanistan and Baluchistan, that a free Baluchistan would dramatically change everything in the region, bring an end to “Pakistan’s arrogance and hostility toward the United States and the Baluch people.” During the congressional